11 Great Baseball Hitting Drills That Every Coach Should Know:

Baseball hitting drills are more than just another gathering at the cages with players and coaches. The game is a passion that they share for learning and winning, so the coaches need to be very considerate about the choice of drills for players.

The drills should be comprehensive enough to challenge all the aspects of baseball batting to ensure a better practice. Here are 11 great baseball batting drills that every little league and youth baseball coach should know.

This hitting drill is a handy drill for players of all ages. I highly recommend using this drill for several reasons.

When players lack confidence, they tend to over-swing.

The “Swing Ladder” hitting drill helps the player take tension free swings and establishes this as a swing habit at the very beginning of the off-season.

It’s always easier to find your swing when you start with a lower amount of effort. On the flip side, it’s challenging to find your “best swing” when you try to swing as hard as you can first, then decide to back your effort level down.

When a hitter is struggling many times, I tell the hitter to take their 50% to get them to relax. Once the hitter starts taking swings at different effort levels the hitter begins to understand when they over-swing or under-swing. The goal is to hit the ball as hard as you possibly can with the least amount of effort.

By using this drill, the player will be able to identify the feel of how much effort they are using to create the swing they want to take their best swing. If your goals at the beginning of the off-season are to increase bat speed as you possibly can, then I would recommend starting off with this drill first and then up the effort level. This will help the hitter establish solid swing fundamentals before they add additional effort.

The hand that takes the bat to the ball is top hand on the grip. It is integral that you work on your strength and expertise with this hand. For practicing this, we do a one-handed isolation drill. The batter relies only on his top hand for this drill. The batter grips the bat from the top of the grip and works it like a tomahawk.

Then he tries to access the top of the ball and hits it towards the ground. Another player or the coach of the batter soft tosses the ball above the waist for him. Afterward, the batter hits the ball from the top and hits it directly into the ground. To perform this drill in the best manner. We suggest 25 swings three times a week.

The next drill on the list of youth baseball hitting drills works on bottom hand power and skills. The bottom or pull hand gives hitters the power that they need. When you do this drill with a hitting machine, make sure that the machine is set at a high strike rate setting.

Only the bottom is used by the hitter in its usual position close to the knob of the bat. The coach has to be sure the ball goes above the waist of the hitter. The ball is perfect when tossed to chest high or numbers high. This is where the hitter steps into the ball and hits it using one hand only. For this drill, we recommend 25 swings three times a day.
The Power hand drill can also be performed with the Tee.

Inside, away and the middle is the three pitch locations that are allocated to the hitter for practicing. The coach or another player presents the ball to the batter by using techniques like soft toss, batting tee, and front toss. When the location is inside, the batter needs to involve his hips and then turn on the pitch while pulling it.

The purpose of this drill is to teach the batter concentration and to keep the weight back. The coach has to toss two balls while calling top or bottom as he releases them. The called ball is hit into the center or the fence by the hitter. The batter can practice this one from several locations. The coach can also use fake toss and change the speed as well as use different release points. Here are some tips for this drill:

Two-ball soft toss drill can also be used with color balls. When tossing the balls in the air, the tosser will call out a color of one of the balls, and that is the ball the batter should be hitting.

The speed of the ball being delivered is more adequate from this distance, and the batter can develop better quickness of bat speed among other skills. The coach must always use an L-screen for this drill. Regular or golf sized wiffle balls can be used for the practice of this drill.

This one is among the best baseball hitting drills as the hitter has to assume a right and comfortable stance and then close his eyes for each swing. Every time the coach or holder will vary the location and strike height. Then he gives a verbal command, and the batter hits the ball after opening his eyes. To hit inside, middle and the away pitches the batter has to utilize the right swing.

This is one of those drills, which is used to shorten the swing of a hitter. The use of drills shortens the swing of the hitter. If the batters are too long to the ball or have A to B to C slow-pitch softball swing, then that swing is considered a long swing.

The batter begins by setting up his hands 8 to 10 inches from the fence with the fence being behind him. The back foot of the batter should be parallel to the fence. The batter will hit the barrier or the fence if he loops the bat or casts his hands backward and of course, that is what we are trying to avoid.

Stepping out is one of the most common recurring mistakes made by young hitters today. Performing this drill will help prevent the hitter from making that mistake. The hitter begins with being one step behind the point where he normally stands in the batter’s box. He will move his back foot and then the front one and step towards the plate.

The hitter attacks the ball as soon as his front foot lands on the ground. He should waste no time in hesitating before hitting the ball. This way he will develop the habit of stepping into the ball when he has to attack it. It will be hard for him to step out since his momentum direction is towards the plate.

This drill has five people in each group and is great for sharpening the bunting skills. The player should employ the square around bunt or pivot technique. The batter has to bunt the ball towards each one of the four fielders. The hitter bunts to each fielder and takes the place of the left fielder. Then the right fielder comes over to bat, and the others move over one place.

The coach has to direct the batters to softly bunt the ball to fielders. The batter has to change the height by bending his knees and keep the bat at an angle of 45 degrees. The fielders should promptly catch the ground ball bare-handed and throw the next strike towards their hitter. They should also practice defensive moves and skills. 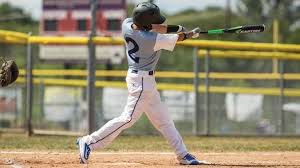 I am going to leave this drill with you so that it may help prevent too many of the emotional roller coaster hitters go through playing baseball.  The drill is for learning plate discipline and anticipating pitch location depending on the count of balls and strikes.

For this drill to be useful, you’ll have had to discuss the concept of plate discipline and adjusting to different counts.

Setup:
This is a variation to your normal main station batting practice and works well in a cage as well. It can also be used for a scrimmage situation.

Execution:
When a new hitters steps into the box, he starts with a zero strike count. I don’t track balls in this drill as the goal is to have them adjust to the number of strikes they have in the count (for older teams this might need to be incorporated as a 1-1 count might be different for a hitter than a 3-1 count.

The player should put the barrel of his bat in the middle of the zone where he likes the ball the most. That gives the coach an idea of where the ball should be for the player to swing with zero strikes.

Again if you haven’t worked with them on shrinking the zone with zero strikes, then this drill doesn’t make any sense in less you just want them to adjust to a bigger zone when they have two strikes.

For batting practice:
Throw the first pitch, if the pitch is not in the zero strike zone and the player swings, the player loses a swing in addition to the one just taken. If the pitch is a strike whether in the zone or not, then the count goes to one strike.

At one strike, ask them what their zone is. For most players, this should be the standard strike zone. Throw another pitch and again make sure that they are swinging at strikes and laying off balls. Same penalty if they swing at a bad pitch.

Example – Batting practice where each player gets five swings.

Hitter 1 only got three swings of the bat instead of 5.

Hitter 2 gets six swings because he was a disciplined hitter.

Teaching plate discipline can be difficult to do. I see many coaches who want kids up there swinging as if swinging is the goal. Swinging isn’t the goal, getting on base is the goal whether by getting a hit or walking. At the same time, we want kids to be aggressive and not let good pitches go by.

This drill attempts to promote swinging at good pitches and not swinging at bad pitches. It makes the players think about the strike count during batting practice and to think about their approach. Feel free to modify how you use this drill. Maybe you want two pitches thrown for each count, or to do it in some other fashion.

As long as the kids understand the rules and the rewards (extra swings) and punishments (fewer swings), then you’ll find that this is a good drill to get kids swinging at good pitches.

This one enables the hitters to hit under pressure while being aggressive. There is a seven-inning game in which the two teams face off. The game is speedy, and the players need to practice both defensive and offensive moves.

For a scrimmage, you’ll keep an accurate count, but there are still rewards and penalties. With zero strikes, if a player swings at a bad pitch and doesn’t put it in play, then he goes right to two strikes.

With one strike, a swing at a bad pitch results in being out. Again, make sure you give a little grey area as you do want players being aggressive if the ball is in the strike zone. You just want to punish the swings at poor pitches. The coach can change the count to 2-2 and might even give an out to each team to begin the inning.