If your goal as a pitcher is to gain more movement on your fastball, Then you might ask yourself. How To Get A Two-Seam Fastball To Move? it is helpful to have an understanding of some basic physics. A baseball is a sphere, and like any other sphere, it is subject to specific laws.

The most influential is an object moves at a constant velocity unless enacted upon by an external force. Regarding pitching, velocity is provided solely by the pitcher’s arm and matches the speed of that arm at the point of release.

From that instant, the ball is enacted upon by gravity and by air currents, which immediately begin the process of deceleration at the rate of approximately one mph every seven feet. Regarding a 60’6” mound, that means the fastball loses about eight miles per hour by the time it reaches the plate.

How To Sustained Maximum Velocity

One way to maximize sustained velocity, and minimize deceleration, is to throw a four-seam fastball. The four-seam fastball works in two ways. First, the rotation of the ball is centered. A sphere that has a steady rotation.

Rotation centered top to bottom around its axis will travel a more direct path and will have less confrontational force, something explained further along. Second, the ball will be less susceptible to the friction enacted upon it by the surrounding air and the fingertips at release.

That said, the objective of this article is to explore strategies for maximizing movement, which though enhanced by throwing velocity, is not exclusively dependent upon it.

To influence movement, the pitcher needs to learn to manipulate the ball taking advantage of both its shape as a sphere and the laws of physics that govern objects in motion.

How To Get The Two-Seam Fastball To Spin

To obligate the ball to move in one direction or the other, meaning a path to the target that is not straight and direct, the pitcher has to learn to make one half of the ball spin faster than the other, thereby creating a confrontational force within the ball.

One force of arm speed is driving the ball forward, while the other ball rotation is trying to push it to one side or the other, depending upon the spin. The rotation of the ball advancing creates a cushion of air around the ball. The side that is spinning faster is cushioned by lower air pressure than the side spinning slower.

Eventually, the higher force will over-power the lower pressure and push against it like a snow plow. A ball thrown by a right-handed pitcher will run in towards a right-handed batter, and vice versa for lefties. Movement in the opposite direction refers to as a cut. However, cut uses over-spin while run uses backspin.

What Is The Most Effective Way To Make The Ball Run

The most effective way to make the ball run is to employ a two-seam grip. Hold the ball where the seams most resemble railroad tracks. Place the middle finger inside of but in contact with the outside seam, and the index finger inside of, but in connection with the inside seam.

Make sure the thumb is also in contact with a seam. Where exactly will depend on the length of the pitcher’s fingers? An arm slot somewhere between ten and eleven o’clock will assist in tilting the axis of the ball, as will a release point out in front of the body with full arm’s length and range of motion.

Releasing the ball as far out front as possible, and in a path that is north to south, allows the middle finger (the longer of the two) to have more significant influence over the rotation of the pitch. It remains in contact with the laces a moment longer than the short index finger, and it is that extended connection that will force that side of the ball to spin faster. 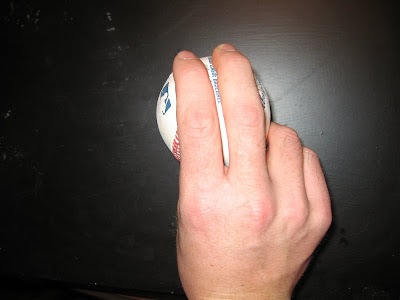 A second option is to throw what some refer to as a one-seam fastball but is just a modified two-seam grip. For the one-seam, the middle finger is set the same way as it is for the two-seam, but the index finger is tight beside the middle finger and makes no contact with a seam.

To influence axis tilt, slide the fingers up the ball so that the middle finger is along the seam as it widens. This grip will produce less overall pitch velocity. The pitcher should experiment with both grips and use the one that provides more significant movement.

Regarding Movement With The Baseball

Regarding movement, there is the potential for a more significant run (movement) with greater arm speed. Greater arm speed tends to produce more rotation, and even a single additional rotation will result in a higher run (movement). The idea is to get the ball to rotate as many times as possible from the point of release to the point where it enters the hitting zone.

Keep in mind, that unless a pitcher throws sidearm, the elbow at the point of launch, where the ball is perpendicular to the ear, must be elevated no less than shoulder height, and preferably higher.

The elbow down will result in movement—it places the hand on the side of the ball at the release point, thereby creating east to the west rotation, but it also puts the elbow joint in a poor position bio-mechanically and will lead to both bicep tendonitis and elbow trouble.

Experiment With Pitches And Grips

Pitchers should also always experiment and work on How To Get A Two-Seam Fastball To Move. This can be done with the location of the fingers on the ball concerning the seams—but in practice, not in the game. Just vary the grip while playing catch and take notice of the resultant rotation and movement of the ball. As you discover what works for you, continue to modify the release until you develop consistency to the degree of the desired action.

And although arm speed is significant, over-throwing the ball  (it’s called muscling-up) tends to straighten out the movement due to a loss of the natural whip action of the arm and wrist. In other words, the release point gets cut off.

Movement Pitch Rather Than A Straight Or Speed Pitch

The Two-seam fastball is the second most common pitch in baseball. It is a variant of the Four-seam straight fastball and basically has the speed of a fastball, but the general movement of a screwball (fades in towards right-handed batter for a right-hander, opposite for left).

It is thought of as a “movement pitch” rather than a “straight or speed pitch” Most pitchers have a version of the Two-seam fastball in their repertoire because it gives you the speed of a fastball and the added element of movement. The pitch is easy to learn, but hard to master.

Just as with the four-seam fastball the arm and body motion are the same-your natural pitching motion- however, there is a different hand motion. Because you want your two-seam to have motion one has to slightly pronate the hand; when throwing rotate your hand a little so that the palm faces towards the outside. This will apply spin which leads to friction resulting in motion.

There are several grips for the two-seam fastball but the most common is to place the index and middle finger along the seams where they are the closest (Where the horseshoes face inward toward each other). The two-seam is gripped tighter and deeper in the hand than a four-seam in order to create friction.

Place your thumb directly on the bottom side of the baseball between the narrow seams. When thrown correctly by a righty the two-seam fastball will move in towards a right-handed batter or away from a left-handed batter. This movement and break is similar to a sinking fastball and is opposite to a cutter which cuts in toward left-handed batters.

Conclusion – How To Get A Two-Seam Fastball To Move

As a final note, there are those that uphold the benefit of consciously exerting more pressure at the point of release by pushing down on the seam with the middle finger, maintaining that doing so tilts the axis. It seems logical, but if it were that easy, many more pitchers would be doing it.

So since you have that ball in your hand, find a partner with whom to have a catch and start experimenting. Vary the placement of your fingers upon the seams, their closeness together, the angle of your hand at the point of release, and be observant.

As you detect the beginnings of the movement that you seek, continue to modify. With continued practice and a developed feel, you will command the type of movement that keeps the ball off the fat part of the bat and leaves the hitter chasing air.

How to Run a Delayed Steal in Baseball