How To Play The Outfield

The ability to position yourself in the outfield

There is no reason for outfielders not to know How To Play The Outfield to position themselves an equal distance apart from each other when they all have various strengths and weaknesses regarding going after a ball in the outfield. For example, the center fielder should always shade toward the side of the slower outfielder. Another example would be the case where the center fielder has great speed, which would allow the left fielder and right fielder to shade a little closer to their respective foul line.

When the wind is going to be a factor affecting the flight path of the ball, the outfielders must shade a few steps in the direction of the wind as they position themselves for each hitter. The distance away from their normal position would be affected by the intensity of the wind. It also must be understood that the baseball will carry farther in the light dry air, and carry less in the heavy damp air. The position of the fences

The speed of the infielders

If the pitcher on the mound is a power pitcher with an excellent fastball, it will usually cause batters to hit the ball late. If he is a breaking ball pitcher with very little velocity on his fastball, the tendency would be for most hitters to pull his pitcher. If a pitcher is wild, it is best to shade all hitters a little deeper, especially if the pitcher is wild high. If a pitcher is tiring late in a game, it is best that the outfielders shade a little deeper.

Each outfielder must quickly assess each batter’s hitting ability to properly position himself for that particular batter. The coaches can assist the outfielders in evaluating the opposing hitters by watching them hit in batting practice or through the use of scouting cards which chart each ball hit in previous games. Any positioning in the outfield acknowledges the batter’s strength areas and where he is most likely to hit the ball hard.

The count on the batter

Before each pitch, the outfielders must know how many men are on base, where they are, how fast they are, and what effect will be on the status of the game if they score. The batter-runner would also be considered as a base runner. This information would better allow the outfielder to make the proper throw, anticipate steals, pick-off plays and bunts.

How to Play in the Outfield

The inning and the score

Each outfielder must discipline himself to continually know the inning, the score, and late in the game what runner(s) represent the tying or winning runs. This information will often dictate how deep the outfield must play.

The number of outs

Since most hitters will go after the long ball with two outs and no runners on base, the outfield should shade a little deeper in this situation. With two outs and a runner at first base, the outfield should shade a little deeper to get better angles on balls down the line or in the gap to prevent the runner at first base from scoring. Runners will run differently according to the number of outs, and this needs to be taken into consideration also. Thus, the number of outs will help dictate depth in the outfield.

Priority For Catching a Fly Ball 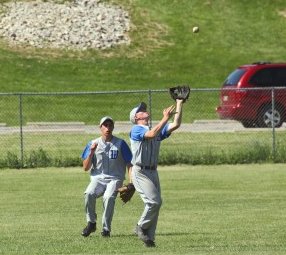 How to play the Outfield

The priorities for a fly ball start with the center fielder having complete control over everyone on the field and then moving in. The basic premise is to have the player moving in on the fly ball have control and the ability to call off the other player. If you look at the diagram below, you’ll see the arrow pointing from each player to the other players that he can call off.

Confirmation For Who is Catching the Pop Fly

Using the same example, the shortstop is going back on the ball and calls “Ball Ball Ball.”  As he is getting closer to the ball, he hears the center fielder running hard towards him. His natural reaction will be to worry about the center fielder running into him. He may catch the ball, or he may slow down and have it drop behind. The chance of this happening can be reduced if the center fielder can give a call to confirm that the shortstop is the one who is going to catch the ball. We do this by having the other fielder confirm with “Take it, Take it, Take it” from the other player, he can be confident in making the play.

Outfield Strategy:  How To Play The Outfield and Where to throw the ball 1. The rule of thumb is you should throw two bases ahead of where a runner starts. This applies to a ball that you can get to, that doesn’t get past you.

2. Most of the time, you throw two bases ahead of the lead runner.

3. It is essential to keep your throws low enough that a cutoff man can make a play and redirect the ball to another base if he needs to. This keeps the double play in order, which is always very important.

4. Keeping your throws down will force the runner to make a decision. He is not sure if the cutoff man is going to cut the ball or not, and therefore will most likely stay at his base and not try to advance. If he does, the cutoff man will cut the ball and take an easy out. 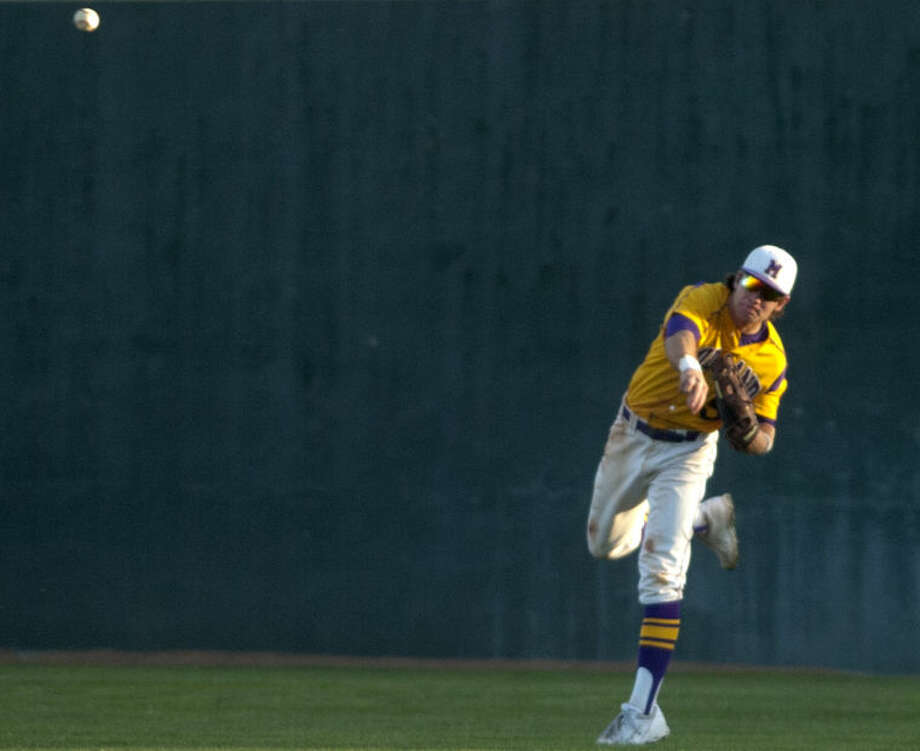 “Know hitter tendencies. A key for all outfield positions.”

5. Keeping your throws down and using one or two hops to reach your target makes it tougher on the runners but it also gets to your intended target faster than if you were to make a high rainbow throw that didn’t bounce. Also, it allows your infielders to make plays on other base runners.

6. With a runner at 1st base and less than two outs, a ball is hit where an outfielder has to move a little to field the ball; he has a decision. Will he attempt to get the runner at 3rd or throw it into 2nd and keep the hitter at 1st leaving the double play in order?

7. With less than two outs we want to keep a double play in order. If there are runners on 1st and 2nd base and there is a base hit to an outfielder, the throw will be in the direction of home plate. Keeping the throw down, the infielder will decide to let the ball continue traveling home, or to catch the ball and throw it to 3rd, 2nd, or 1st depending on what the other two runners are doing.
On this play, you want to take an out if you can get it, but here we can be less aggressive unless the situation calls for a “must attempt” at 3rd base.
It is much better to play it a little cautious and keep the double play in order, than not to get a single out and have runners at 2nd and 3rd. Both of which are in scoring position. 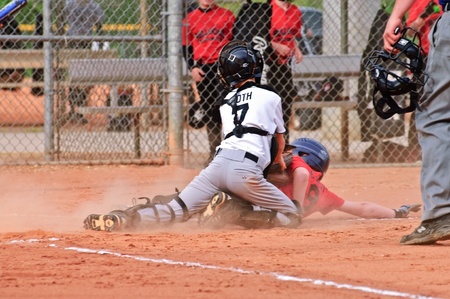 How to Play in the Outfield

Have an idea what you are going to do with the baseball before it is hit to you, but also listen to your fielders close by who should be telling you where to throw the ball.

How To Play The Outfield is by Knowing Your Runners

Know if a runner is fast or slow. Has he been aggressive in the past or does he jog around the bases? Knowing this can help your decision-making process a lot easier. Most times we have to make split-second decisions. Any information we get that can make our decision a little easier is always welcomed.

Knowing your runners will help a lot when trying to keep the double plays in order.

How To Hit With Confidence

Hit A Baseball – How to be a Great Hitter